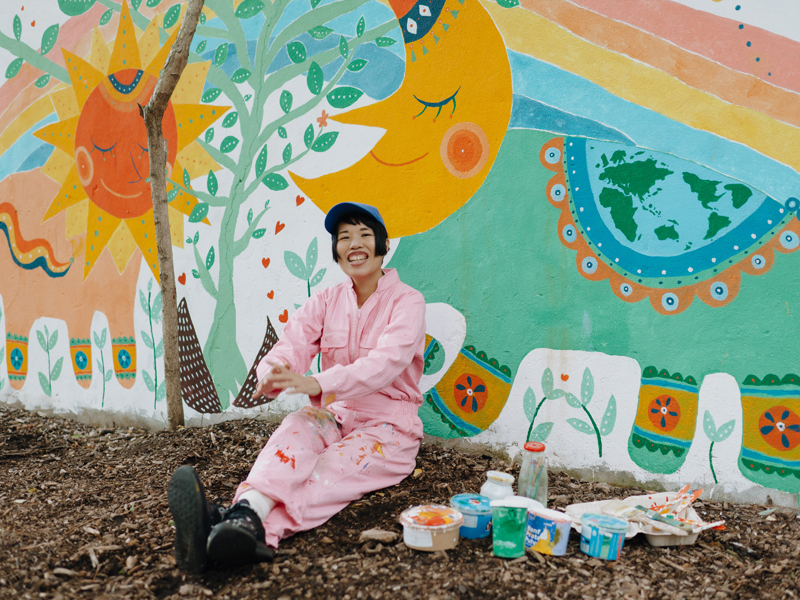 KiKi is a Japanese Illustrator born in a beautiful small village in Japan, based in Berlin, Germany.

Her illustrations are greatly influenced by her childhood memories in a small Japanese village rich in nature where was born and raised. She learned about Intuition, sensation, and many colors formations there and met characters hidden in nature.

In the summer of 2016, she moved to an international city, Berlin, Germany, out of her desire to see more of the world. The intersection of different races, cities, and nature has further developed her sense of color.

Currently, along with she works with businesses on illustrations, since 2022 she creates illustrations as a tool for the natural environment and peaceful activities. In particular, her murals breathe new life into buildings, connect people and communities through illustrations, and create a circle of happiness.

※As a sequela of sudden deafness that developed at the end of 2021, I have a recruitment phenomenon (Deafness in the high register/ auditory hyperesthesia) in my left ear, so sometimes difficult to listen.  For that reason, I often have earplug in my left ear and when talking I may ask again

There is no public transport. An hour drive to the nearest store by her father’s car. Anyway, her home town is a really small village with really beautiful nature (Currently about 25 people live in there). When she was a child, it was great entertainment to play endlessly with paper, color pens, and the fantasy world of her head.

Since there was no high school closeby, she left her home to go to the one in another city. she had to be independent of 15 years old and drawing illustrations with the fantasy world of her head became mental support for her.

She has written a series of columns on sustainability in several Japanese media.